I knew today was going to be tough on me. I’d braced myself since the beginning of our trip to Africa for what would likely be the most emotionally trying day. Today’s feature item in our Christmas Gift catalog was what World Vision calls OVC’s…orphans & vulnerable children. We were going to a small village in Ghana to meet four children who had lost both their parents.


Having grown up with two incredible parents myself, I can’t imagine how differently my life would have turned out if I’d lost them as a child. Even in the United States, I’ve always had a soft spot in my heart for children in foster care or up for adoption.

In Africa, if you lose both parents it’s not assumed that your relatives or the government will step in to help you. Instead, many children become outcasts in their communities and are left to fend for themselves.

When we arrived, our team discovered that not only were all four children orphans but they were siblings. The two oldest sat down with us to tell us their heartbreaking story.

With tears running down both their faces, they struggled for words to describe the pain of losing both their parents six years ago. Although they don’t know how their mom or dad died, it’s assumed their parents contracted HIV…a common problem in Africa.

The oldest boy was just 14-years-old. He described how he and his siblings were left without any food, clothes or money. They were forced to scrounge for anything to eat and were treated like ‘animals’ in their community. Every night, they prayed to God for help…knowing that they’d have to soon resort to stealing or prostitution just to survive. Yet, all four children still forced themselves to continue going to school…knowing it was their only hope for a good future.

Until this trip, I’ll admit…I didn’t know the scope of what World Vision does. I was just hired a few months ago and I came in with only had a basic understanding of the type of work our organization is a part of worldwide.

Today, I couldn’t be more proud of what we are doing. I listened to these children describe how World Vision stepped in and provided them with food, clothes, school supplies and fertilizer to grow their own garden.

Now the oldest boy wants to become a teacher, and says he wants to use his experience to help others. The oldest girl wants to be a nurse, because she is so impressed with the nurses in the nearby World Vision clinic.

They still miss their parents immensely. A poster sized picture of their mother continues to hang on the wall inside their hut. But they told us, they know their parents would be so proud of how far they’ve come.

I'm so glad I get to be a part of something like this. What's really cool is that so can anyone! In the Christmas gift catalog, you can give to a fund just for Orphans and Widows. The money is used to provide food, shelter, education, job training etc to the most vulnerable.

I asked this family of 4 what their lives would have been like had World Vision NOT stepped in.  The tears flowed as they said they wouldn't have hope. This Christmas, they celebrate together not only believing they have a good future ahead of them....they KNOW they do! 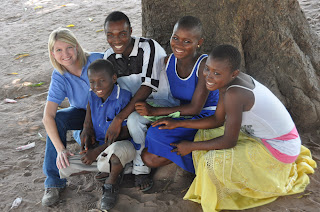 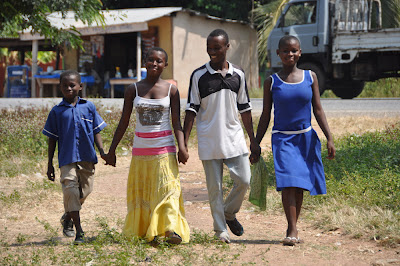